In terms of security, the door’s sole purpose is to delay an intruder. A delay that gives you time to respond.

The better prepared the door, the more time for the response and as you come to learn, almost all residential doors fail miserably at this task.

The purpose of this video is to show you how a few simple steps can take nearly any ordinary exterior door and transform it into a formidable barrier that buys you time – time to respond.

No barrier is impenetrable. A determined enough folk can defeat any obstacle and this is ¾ inch piece of pine of the material used in almost all door jambs.

This hole represents the approximate location of a hole that accepts a throne deadbolt. In almost all instances, this bit of material here is all that is truly in the way of an intruder kick in down your door. 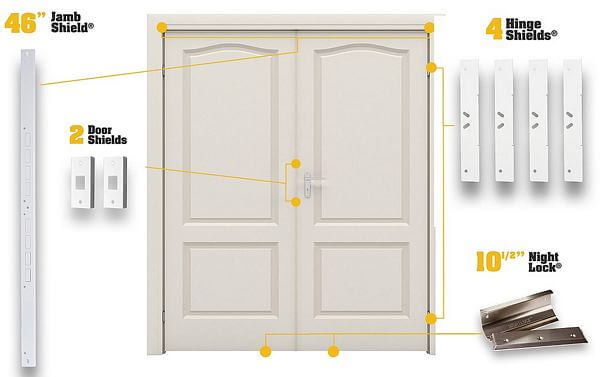 I’d bet that nearly all residential doors can be defeated with one kick!

It does not buy you much time, does it?

One kick will bloat this little piece of wood or shatter the door jamb.

Almost all residential doors operate under the false pretense of security, when in reality they are about cheap manufacture, ease of installation and thermal efficiency.

In addition to flimsy door jambs, most of the hardware that holds and locks your door, uses these tiny ¾ inch screws.

These screws are just enough to keep the door from falling off the frame, let alone stopping unattended forces kicking it down.

If you truly look at and understand the way doors are installed, it’s more like a house guest that part your home.

Behind your flimsy door jamb, there are two two-by-fours on either side. These studs are integral to the structure of your home and can withstand much greater force.

The very first step you need to take to make the door part of the wall is to tie it into the rest of the wall.

Luckily there is product out there designed to do just that and a little bit more and is my first pick in hardening nearly any residential door.

Door Armor is a kit that is specifically designed to utilize the structure of your home and strengthen your door to make it a true delay barrier.

It consists of five pieces of steel that strengthen and reinforce key areas that are prone to failure. 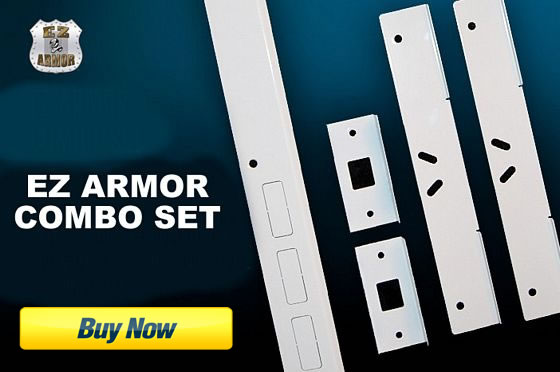 It can be used on any new doors and will retro fit most existing doors.

It comes in a variety of finishes and aesthetically unobtrusive when the door is closed.

The first component of Door Armor is jamb armor. This addresses the splitting of jamb by tying the strike plate into 2-by-4s behind it.

It replaces your regular strike plates with 48 inch piece of metal with that metal being tided to two-by-fours with seven four-inch screws.

It also vertically distributes the load from just a few inches to almost four feet. This takes the weakest point of your door and essentially makes it kick resistant.

Instead of having a crack a small piece of wood, the intruder now has to shier seven screws, break the door armor itself or cause the wall to fail – all unlikely events.

Once the Jamb Shield is installed, the force that kicks are going to go to other parts of the system.

The second weakest point in the door itself is where the latch protrudes. For this, Door Armor provides two door shields.

These install over existing latch plates, using two and half inch screws that are vertically spread. Even if the leading edge of the door split, the steel door shield will hold the latch in place, keeping it secure.

There are other systems out there that offer jamb and door protection, but as far as I’m aware, Door Armor is the only one that protects the hinge side of the door as well.

Door Armor has patented hinge shield that continues the same theory to the other side of the door. The hinge shield uses two of existing attachment points of the hinge and then two additional points spread away from the hinge, all attaching with four inch screws.

Same concept. Strengthen the attachment points and spread the load. The kit has two inch shields which should be attached to the bottom two hinges.

Once the system is in place, you door are greatly strengthened.

I do not have any interest in trying to destroy my brand new door, so here is the link for videos of people trying to take out the door fortified with Door Armor.

Now, Door Armor isn’t for every door. Suffice it to say that not all doors are created equal. Door Armor is meant to be installed on an inch and ¾ thick solid wood. Metal or fiberglass exterior door, preferably one without window, for obvious reasons.

As you can see in the link to the video, in this system, the door itself becomes the weak point.

For most people with a screw gun and any mechanical ability, the Door Armor can be installed in minutes, without removing the door from the jamb. All new installations should work but you are going to want to verify a few things.

If you can fit two quarters stack together easily between your existing door and jamb and one on hinge side, you should not have any issues. If you can’t, your installation will require some extra skills such as planning the door.