In the time it takes you to watch this next story, about 18 homes in this country will be burglarized.

Do you want to protect yourself from becoming a victim, then the product Chris Anderson is testing this week might be the key.

But does it work?

New statistics came out last month showing crimes in mid south were down across the board, except one area – home burglaries.

Thieves are literally kicking in your door and stealing your stuff.

How can you stop them?

But does it work?

If you have been a burglary victim, you know how this feels.

Just last week actually we had a situation where someone came and kicked in the back door in the middle of the day.

So once Mark saw this on the Door Jamb website, he was more than ready to try it out.

I’m really interested to see how it looks, how it works and if it works.

But first we have to navigate our way through six pages of instructions.

After 45 minutes of cutting, drilling and driving in screws and a little TLC – okay so I think we are finished.

We are ready to put Door Jamb Armor to the test.

It’s not moving at all!

This could be your stress reliever at work.

I can’t get the door open.

I had to give it a shot. 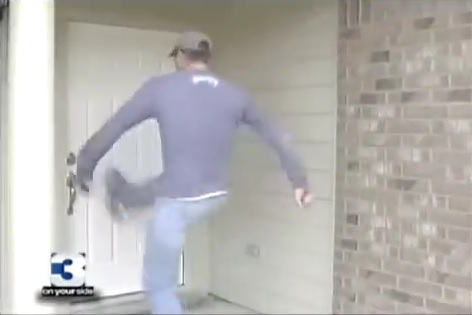 Watch the windows when he kicks it. That’s a lot of force.

That door is not coming open.

And look at that. No damage to the door or to the Door Jamb Armor. Now that’s impressive.

I’m so surprised but I’m gonna pass it. The Door Jamb Armor works!

Door Jamb Armor you pass our Does It Work test.

What you have in your hands is something that a police department uses to get through doors.

Door Jamb Armor doesn’t claim a protection against this kind of force but we are about to find out just how tough it really is.

I’m gonna try to hit it right there. So here we go.

There is no way that Door Jamb Armor can withstand actual police battering ram or can it?

Do you know that it only takes about 2-3 kicks for a burglar to kick in door even ones with a deadbolt?

The Door Jamb Armor was able to hold up against an onslaught of vicious kicks.

But we like to take it to the extreme in Does It Work and go above and beyond the claims and expectations those products make.

Wait until you see this.

Our kicks were no match for the Door Jamb Armor which is why it easily passed our Does It Work test.

But we decided to kick it up a notch.

This is something that local authorities might use to come in when it’s necessary and we all think that this is gonna, at least, have a different results than your foot.

We are not exactly sure what is going to happen.

The door is locked and still secured.

I’m gonna try to hit it right there. So here we go. 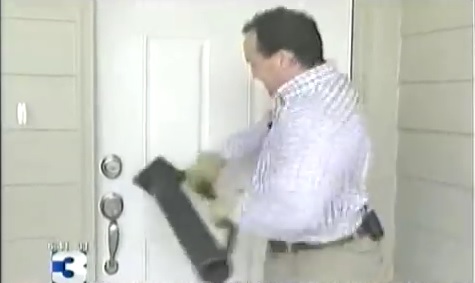 We broken the door but the Door Jamb Armor is held.

Amazing, Door Jamb Armor doesn’t claim to stop that kind of a forceful impact but it sure did.

Finally after several minutes of using the battering ram, the door itself cracks.

We bust through that strong fiberglass door but despite this serious punishment, the Door Jamb Armor is really barely damaged.

On the door jamb and then on the hinges.

The problem why it is so easy to kick it in is it’s so thin, your door jamb, the wood is so thin and bum, they kick it right in so easily.

What this does is it reinforces it, makes it impossible to kick in.

How to secure a door from being kicked in